Mistresses pay guys to entertain them by being their trampling pads

These mistresses wanted to hire trampling pads. The human kind. They are all trampling central enthusiasts and they wanted to have a great time with it all of them at the same time. It had been long since they had done it all together at the same time. So they paid these guys so that they would endure their trampling and since the money was good, the guys agreed. But they worked for it as the mistresses used both bare feet and heels to do it.

Goddess Lena loves to humble proud guys. And when she met this one, she was dying to dominate and humiliate him. That is what the mistress did as she lured him to do what she wanted. She teased him and turned him on. Once he was turned on, she had an easy time controlling him and that is when she trampled and dominated him to teach him a lesson and also humble him.

Mistress try trampling fetish on each other

Mistress Sonny and her friend Stella found out about trampling central but they did not have a slave to try it. They were dying to try it and after much discussion, they settled on trying it on each other. They took turns to trample each other and they enjoyed it although they enjoyed the trampling but not the part where they got trampled. But they built their competency and by the time they were getting slaves and losers, they were pros.

Madame Du Pont had new shoes and she wanted to try them on this guy. She waited for him to do something that warranted being trampled because she was not one of those mistresses who looked for scapegoats in order to punish someone. She wanted someone to earn their punishment and for her to torture them without feeling guilty about it. So she stomped his head and his chest as she knew he deserved it.

Madame Marissa felt that her boyfriend was not pulling his weight around the house. She wanted him to stop being lazy and she even wanted him to start working out. She was fed up with his laziness and she trampled him to send a message that it was not going to be business as usual for them. The poor boyfriend had to learn a lesson but luckily, he changed for the better.

Mistress Gaia was disappointed in the kind of work her slaves had done. She expected better of them and since they had underperformed, she had to show them the extent of her disappointment with them. The mistress forced them to lie down and she trampled them using her high heels. The angry mistress cruelly made sure whatever they had done would never be done again before she let them go.

Mistress Mira was angered by this guy's refusal to follow instructions. She did not want him to be a liability to her and so she set him straight by trampling him and humiliating him. She made sure to crush his neck with her shoes and to trample him as cruelly as she was able to. She told him she would not sit back and watch how he tried to sabotage her.

Mistress tramples boyfriend with boots as part of foreplay

This mistress knew her man loved a little bit of pain as part of foreplay. They had tried a lot of things and today she wanted to try something else that she had not tried before. She tried trampling him and she used her high heels for there to be significant pain. The boyfriend loved it even though the pain was slightly more than he was used to getting from her.

Goddess Chanel and her friend pumped up this guy's ego and told him how he was a macho man and he was an alpha male. He believed the hype but did not know where they were going with it. He was also lured to endure the pain of their trampling and in wanting to prove his machoness and his alpha maleness, he agreed. The mistress had a great time trampling him with heels and he felt like crying but had to struggle to hold on.

Mistress Melissa wanted to show her disdain for this loser so she chatted with her friends on the phone while she was trampling the loser using her boots. She dominated him and she got him to regret what he had done to her and to come clean over what happened that led to him to be the one being trampled as well as punished for it. He told her all he knew. 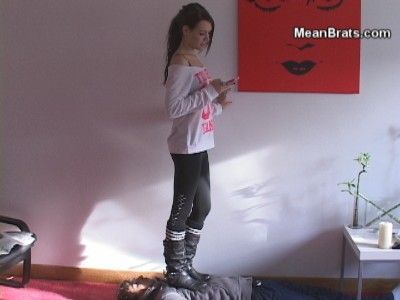